Scrambled Eggs, With A Side of Anti-Semitism

Local diner. Family-owned joint. Circa 9 am on a Saturday morning.

We’ve eaten there before. It’s fast, fairly decent, and the model airplanes covering the walls and ceiling keep a curious toddler entertained while he’s waiting for his breakfast.

As Max stuffed hashbrowns into his face, Sean and I debated how appropriate it was to have swastikas smiling (frowning?) down on us while we drank our coffee. The planes are part of history. I get it. But we’re in a diner, not the Natural History Museum. This is clearly someone’s private collection of planes, and whoever owns them, doesn’t seem to mind that a few are adorned with a symbol that represents the slaughter of millions of Jews. Millions of our people.

It was one of those teachable moments, I suppose. Say nothing, silently fume, and feel stupid for over-reacting. Or nicely, gently ask the manager if he’s noticed the planes, and explain why we were offended. Being parents, being Coastside locals, and being overly aware of our minority status, we decided to ask about the planes.

The manager’s reply was nothing less than flippant. He felt that we were over-reacting. He blew us off.

I mentioned that in the eyes of many Jews, the swastika is a symbol of hate and persecution. It stands for death, torture, genocide. He laughed at us. “It’s just a plane” he said. “Take it as a reminder that war is a bad thing….and that we won…at least we won.”

I asked him if he would have something in his restaurant with the “N word” on it. Just because that’s “part of history”, doesn’t make displaying it acceptable.

As the manager excused himself from the conversation, Sean and I wondered outloud if they would display a Confederate flag in the restaurant. Of course not. It might just be “a symbol”, but it’s a symbol of a terrible time in American History. It doesn’t really go with bacon and eggs.

Sean walked Max out to the car, and I walked over to use the restroom. On the way back through the restaurant, I approached our table where the manager was talking to the waitress. But he didn’t see me coming.

“Did you see THAT GUY who was sitting here?” he laughed to the waitress. “He was giving me a ration of shit about the swastikas!!” He smirked.

It was funny to them.

6 million lives snuffed out, 6 million dreams, 6 million people who were all somebody’s child. The symbol of their destruction, the symbol that seperated who would live and who would die, was now chillin’ above our heads like it was NO BIG DEAL to anyone else in this crappy diner by the airport.

And even if you think that we over-reacted in that diner, I’m proud of us that we spoke up in front of Max. I’m glad that he heard us questioning. I’m glad that he saw us telling someone when something wasn’t OK. Judaism teaches us that we take care of others, and maybe a little bit of that happened today. We send Max to a Jewish preschool because we want him to learn all of the wonderful things about Judaism, but it’s also in part so that he doesn’t grow up feeling like “the only one” who is Jewish. We want Shabbat, and Chanukah, and Passover, and the philosophy of Tikkun Olam to be “normal” for him. We want him to embrace how lucky he is to be Jewish. We want him to know that other kids have a Baubee, and that other kids have menorahs instead of Christmas trees. But along with those wonderful things comes great responsibility. The responsibility to speak up when you see something that hurts other people, even if most of your friends on Facebook think that you’re silly for being offended. The responsibility to proudly carry on Jewish traditions, and sing songs in Hebrew, and stand proud that we are sometimes the only voice in the stupid diner that cares about those two airplanes.

At the end of the day, we light our candles on Shabbat like all of the other Jewish families in the world. And for the 6 million who can’t. That my friends, is more important than what happens in a diner. A diner that we will not be returning to. 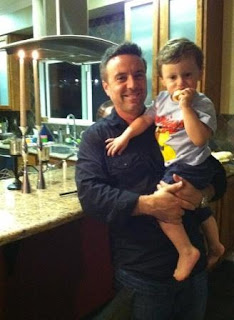 OK, so the Shabbas candles are a little hard to see in this picture….look closely…see them now? And yes, that would be challah (already properly blessed) that Max is diving into.

4 Replies to “Scrambled Eggs, With A Side of Anti-Semitism”