That’s What I’m Talkin’ About! 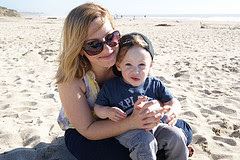 Everyone said it was bound to happen. That my little guy would one day start talking. REALLY talking. And while I still stay up late at night Googling things like “toddler speech delay” and “toddler uses single syllables”, I’m starting to see that Max’s speech development has hit the fast-forward stage.

And what comes out of his mouth is REALLY funny. In the whole my tiny two-year-old just told the lady at the grocery store “bye!! drive car!” kind of way.

Last night when he woke up at his favorite special hour (3:30 am, in case you were wondering), I went down to his room and unlocked the hook/eye latch on the outside of the door and climbed over the footboard of the bed because the crib that he doesn’t sleep in is pushed up against the side of the bed because the toddler safety railing doesn’t quite cover the whole side and he likes to wiggle like an inchworm forward and push pillows away with his head…right out the side of the darn bed and he patted the spot next to him and said “Ma go night ME?”. He doesn’t like the word “with”, but I understood. It was so cute that I almost forgot it was the middle.of.the.goddamn.night.

He yells “Oh DEAR! What happ???” when something falls.

Anything that makes a lot of noise and catches him off-guard is a “Big loud!” as he covers his ears.

He yells “Hey Big Kids!” at the park, and loves to play our new family game “Chase Da-Da!”. 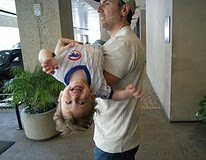 He sweetly says “Move PLEASE” as he pushes you out of the way. He asks daily to “Go Zoo! Ride Train! Choo-Choo!”

He’ll let you know what he wants to eat, too. He yelled out to my mom and I from the back of the car “Eat cupcake!” for no apparent reason, other than that he wanted one. And when the nice bakery lady at the grocery store today found out he couldn’t have the free cookies because they had nuts in them, she gave him a CUPCAKE instead. “MO cupcake! Put mouth!?” he asked all through the produce section, and up and down the bread aisle.

He’ll request his favorite IPad game or the “Joe (George) moo-bee”. And watch out, he’s dangerous in this here “ha(t)” and “cow-bow boo(ts)”….