That’s What I Said

Big boys eat cupcakes all by themselves. Like this one, that Max devoured while hanging out at our buddy Preston’s awesome airplane birthday party… 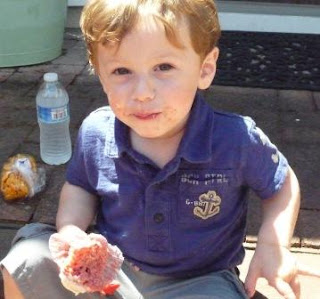 Big boys also have LOTS to say. Max decided that he didn’t want to take a nap yesterday, so as we were driving around (yes, I do that to get him to fall asleep every.damn.day for naps) he started yelling “Go hoooooome!” Which was particularly hysterical considering he has started using two-word sentences oh, just a few days ago. I told him “Mommy is going to get a coffee and then you are going to go night-night”. As I’m pulling in to the coffee shop drive-through, Max puts his little hands together and tucks them next to his cheek. And pretends to snore. Pretends, as in, long drawn out “hooooonk, shhhhhh” sounds.

“Night night!” he says, sweetly…..still pretending to snore. We’re driving down the main road for the thirtieth time and he is waving to every car that goes by. Then he starts counting. Why? Because it’s nap time. “One, two, free, six!” And finally he is yelling “hoooouuuuuuse!” Game over. Max wins. 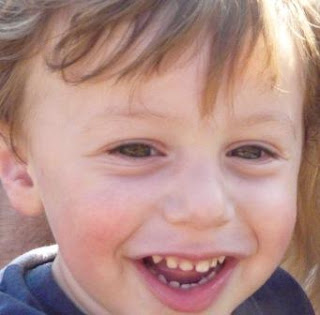 It’s a brave new world now that Max can really communicate with us. Sometimes he makes perfect sense….like the other day when we rubbed noses and I said “nose kiss!” He gave me a big hug, and when our ears pressed together during the hug, he yelled out “ear kiss!” Other times, not so much. When I asked him how he got the owie scratch on his knee at preschool, he answered “Tee (teacher) Zach”. Hmmmm. Teacher Zach is the music teacher. “Did you hurt yourself during music?” Max’s response? “Five six!” So I tried again later….”Max, what happened to your knee?” This time he looked at me like I was the two year old. “Tee Zach!” he said again. And just as I was starting to think that it might be possible that sweet, gentle Tee Zach pushed him over during music, Max yelled out “‘tar!” That would be “guitar” for those of you who don’t have a toddler. Ah-hah! If you watched the video below, you will have a good idea of how my son may have injured himself. I’m guessing he was dancing (again, see video below) and crashed into Tee Zach’s guitar. A plausible hypothesis if you’ve seen this child’s dance moves.

Big boys like to take their clothes off when they think you’re not watching, and run through the house squealing with naked glee as you chase them. Big boys help to throw chopped vegetables in the salad while you’re cooking, but take a bite of everything as it goes in (or licks it, or sticks his thumb through it….remember that when we invite you to dinner!) Big boys say “hug Dada” and “kiss Mama”, and melt your heart time and again as they show you that they are taking in every ounce, every whisper of this world.

One Reply to “That’s What I Said”