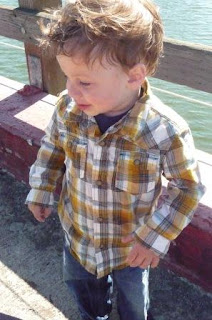 The old man in Starbucks today walked right over to Max and I and nodded towards Max’s drink.
“Is that for him?” he asked.
I had a moment of Mommy Pride. In my head I responded “Of course! Isn’t the little child sized cup so cute! I’m such a great, smart Mommy for figuring out that I could buy him a baby version of my drink….it’s a mini soy milk….for 2 bucks!” But instead, I politely answered “Yes, it is”.
“You’re giving him SOY?” he said.
“I am” I responded. “Don’t you know what soy can do to him?” he countered.
I smiled. Politely, again. “He has a dairy allergy” I said. Nicely.
“But he’s a boy” the old man offered. “It’ll turn him into a girl”.
Suddenly I was back in the parenting workshops that I used to teach. Say what you want your child to hear, we said. So I (nicely, politely) said “No, it WON’T. And he doesn’t even drink that much.” And I left.
I hated myself for walking out the door. I wanted to turn around and say to him “Please, buy him a cup of milk. And then he will throw up all over your shoes.”
“Yes, it’s soy. Is that a latte you’re drinking? Because caffeine is bad for old guys like you.”
“Getting him to drink ANYTHING has been a major battle. I’m proud of him for drinking from a cup. I’m proud that he drinks out of a straw. I’m thrilled that he is finally able to drink a $2 cup of soy milk from a chain store instead of the $42 can of prescription formula that saved his life when he was diagnosed with multiple food allergies and GI issues, so SHUT THE HELL UP YOU STUPID JERK.”
But of course, I didn’t.
Say what you want your child to hear.
Maybe next time, MIND YOUR OWN BUSINESS would suffice. If said politely, of course.

One Reply to “Mind Your Business”