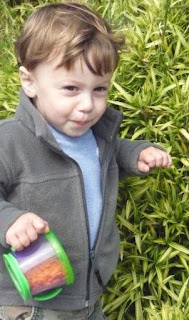 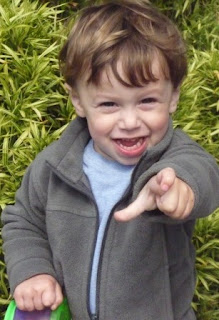 Well, for starters, I’ve decided that parenting a boy means that for the next 18 years I am going to be SCARED TO DEATH. Because Max was apparently born with the instinct to ATTEMPT TO INJURE HIMSELF on a regular basis, and then LAUGH ABOUT IT. Example?
I walk into Max’s room and he instructs me to “sit”. He points to the beanbag chair that’s about 3 feet away from the foot of his bed. 2.5 seconds after I sit down he is on the bed, running towards the end where I’m sitting, and then he throws his arms out and attempts to FLY OFF.
I know, I know…THIS face could cause so much trouble? 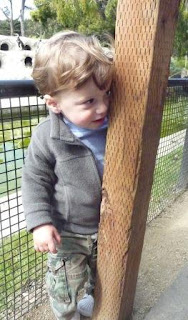 The best part? It’s the look that he gets on his face a split second before he attempts something INSANE. It’s half grin, half are-you-ready-for-this, and a whole lotta impish glee mixed in. 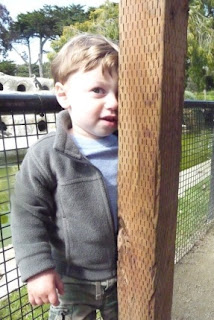 After I caught him (thank god), he decided to try it again. But this time he leaped in the OTHER direction at the last minute. Towards the m-f’ing WINDOW??!!! Of course this Jewish mother has a rule that the window closest to Max’s bed must always remain closed. Warm summer nights be damned, the window is way too low and Max is way too curious. So I figured if it stays closed, Max can’t fall out. Apparently CRASHING THROUGH the glass is now an option. I caught him by the arm as he flew by, and spent the next 5 minutes explaining “That is NOT funny. We do not do that. We do not laugh when we scare Mommy.”
Are you fucking kidding me???? Our two year old GIRL friends are having tea parties right now! They’re peacefully feeding their sweet little stuffed animals, while Max is learning to throw things down the stairs to watch them fall and break.
Stupid me, I let Max witness me throwing my hands over my eyes and yelling “Yikes!”, and now he likes to cover his own eyes after he does something dangerous, and yell “YI!!”. Like after he plays his new game, called “Sit”. Max was standing on the edge of his bed holding on to the rail (the one that’s supposed to keep him safe), and Daddy told him to “sit”. Then Daddy said “No”. So now Max stands there, holds the rail, yells “Sit! No!” while LAUGHING AT US, and flings himself backward on the bed. This kid catches some serious air. Does he look behind him to see if there are pillows there? Of course not. Does he check how much room he has so that his head does not rebound into the wall? Really? No. Not once. He just smacks his head against the wall, covers his eyes with his hand, and yells “YI!!!”.
Yep, this sweet boy…. 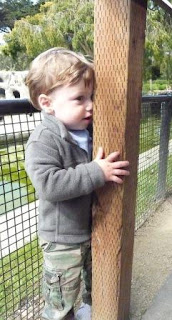 Little boys? I guess the best thing about them is that their sweetness is tempered with fearlessness. One minute he’s watching you closely, 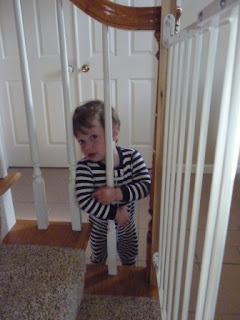 tucked into a new lookout spot ….. 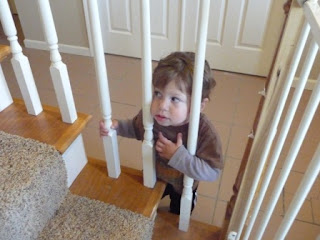 and the next minute he’s running full force toward the street.
All of that energy is enough to wear our future X-games superstar out. Being dangerous is EXHAUSTING. 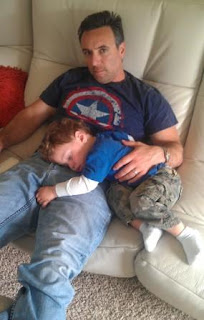