A Little of This, and Some of That… 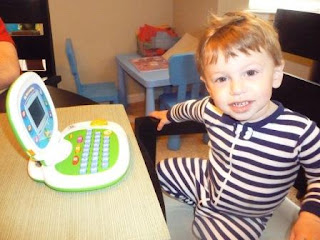 I’ve decided to let Max take over blogging for a bit. He clearly has a lot to say…. 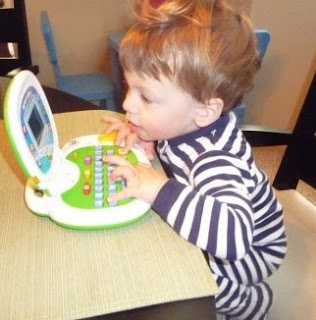 He prefers working on the “pew” (computer) in his jammies, if you haven’t noticed. And as you can see, sometimes all of this “blogging for the masses” is hard work. He’s feeling the pressure…. 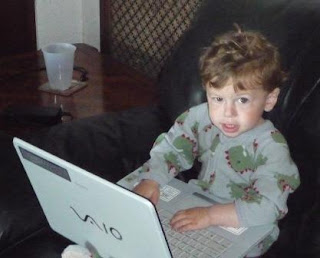 So he takes a break as often as he can. New trick? Playing ball outside with Daddy….. 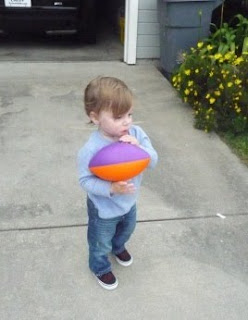 Now that Max is almost 2, he has some new tricks up his sleeve. He’s putting two words together (“Do trains!”, “No Mama”, “Walk Dada”, “blue car”). Tonight he walked into the kitchen with a bucket on his arm, held his finger up in the air and said “back” to Sean and I, and then walked out. As in, “Hang on a minute, I’ll be right back”. Apparently when I say it, my finger is up in the air 🙂 For the past two shopping trips, he has sat IN THE CART for the entire trip! For those of you who know my Max, this is a HUGE accomplishment. No trying to jump out, no reaching back and throwing things out of the big part of the cart. He was a helper. And smiled very politely at the check-out counter and waved, and said “Hi Man!”. This morning he gave his little friend Si-Si a HUG! I love how they play together…..they were “cooking” in the kitchen side by side, and sharing blueberries at the table in the coffee shop. She is usually the one hugging him, but today he hugged HER (she was walking away to go potty….Max didn’t understand why he couldn’t go with her….he thought she was leaving for good….ohh the life of a 2 year old). He nearly knocked her over into the bookshelf with his love, but SiSi’s mama caught them just in time!
To be honest, I had some dark and dramatic things planned for this post. My angst about Max’s upcoming appointment with the allergist….my inner monologue about how this journey is not what we expected…..my sadness at having to see my little boy wake up from naps sobbing uncontrollably because he is hurting…..my frustration at not being able to fix things, having to spend our days at doctors appointments, begging them to take this as seriously as we do. But I got sidetracked, I guess. Sidetracked by all of the new, fun, hilarious things that Max has been up to lately….. 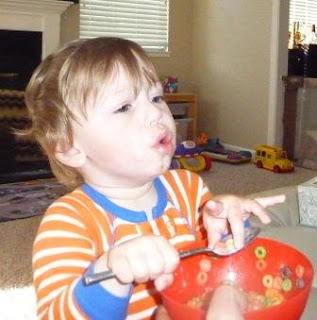 Like eating cereal out of Daddy’s bowl…..or talking to himself while half asleep/rolling around in bed (last night it was “Drill….screw….go!” because he had been watching Daddy fix things in his room). I love the squeal that he lets out when he’s only wearing a diaper and he throws himself on the bed and wiggles around in pure delight. It cracks me up that he has started grabbing his diaper and saying “poo-poo” and heading for the bathroom, even though he doesn’t have to go, and we are nowhere near ready to potty train. Or maybe we are 🙂 When he hurts himself he runs to me and says “Kiss” and then puts the injured place up to my face. Last night when I was trying to get him to go to sleep, he kept putting Louie (his HUGE stuffed dog) up to my mouth and saying “Oooooeeee (Louie)! Kiss, Kiss”. How do you not laugh??

Of course, having a toddler with eating issues means that pictures like this just melt me. Eating a PB+J while kicking back on the couch….like a big boy… 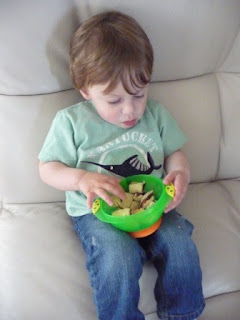 He might still drink a bottle 5 times a day (don’t piss me off or I’ll tell you where you can put your opinion of that!), but he’s also drinking from a real water bottle spout now… 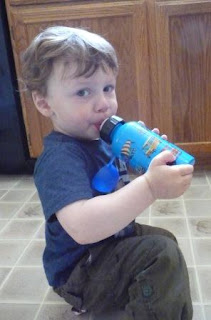 And just because I feel like sharing, tonight for dinner he had chicken, red bell pepper strips with hummus, and avocado. HELLO WORLD, this was NOT A FISHSTICKS NIGHT. I will wholeheartedly accept my Mother Of The Year Award. For today, anyway.