Is it bizarre that I am so fascinated by watching Max’s mind grow every single day? It’s one of those things that you laugh at before you have kids…those parents that celebrate every single word, and every tiny accomplishment. You want to just scream at them….so he said “wa-wa”?! Big flippin’ deal!

But when it’s YOUR kid, you finally understand. Because you see, YESTERDAY Max was stringing two words together (“Sit Ma-Ma”, “Da-Da Car”, and so on). But TODAY, out of the blue, he was sitting in his car seat and I handed him his “Pilot Book”. And he said “Read pilot book”. Actually it was “Reee Pi Book”, but I got it. It was his first three word sentence! Which might be a “Gee that’s great” for all of you, but for me, I’m elated. I’m watching his mind change and grow, and it is FASC-INATING.

You see, when Max was a baby, I initiated most of what we did. And now, he dreams it up. Like here, when he took his tiny little cat toy and wanted it to sit down and play with him. 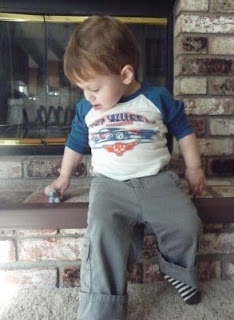 Then he told it what to do… (look really closely, it’s small!) 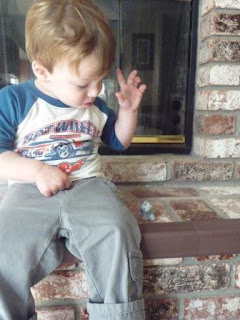 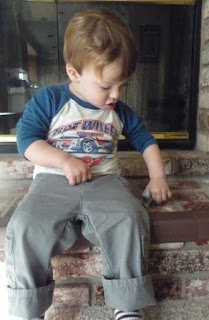 And I just stood there and watched. As Max was a master of his own world. He’s VERY into cars right now too. Complete with the “vrroom” sounds… 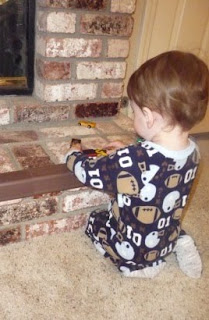 And lining them up…. 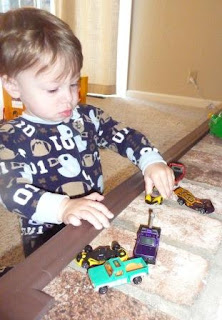 And racing them on everything…. 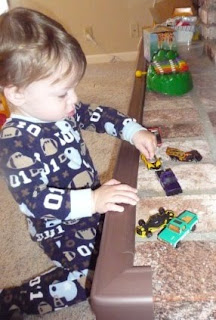 He comes up with the funniest adventures for us to have, and he is VERY dramatic. The minute we turn the corner that he knows leads to the park, he throws his hands up in the air and yells “Yay! Park!” He brings the phone to us and says “Call Pop-Pop” and “Buh-buh? Hello?” He put a toy (OK, it was my credit card, actually) down Sean’s shirt today and then said “Gone!” When it’s time to get out of the bath he says “No! Staaaaaay” and then when I lift him out he actually WHINES “awwwwwwwwwwww”. Where does he come up with this stuff??? And this is probably TMI, but today when we were giving him a bath he was standing up, and suddenly started peeing. And he FREAKED. Now think about it. He’s always peed in his diaper. Or in the bath, but sitting down. So this time he actually SAW what was happening. His face just froze, and his eyes got really big. And he was just watching, completely frozen in place and totally silent. And then he wanted me to take him out of the tub right away! He scared the hell out of himself, it was so funny! Actually, it was another one of those “wow, he’s LEARNING right in front of our eyes!” moments. And it was funny too. Potty training time anyone??