On The Other Side Of This…. 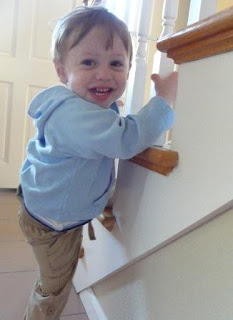 Yes this is a picture of Max trying to climb the outside of the staircase. It has nothing to do with this post, other than it’s cute. Until he hurts himself, I guess….

When I was in college I worked at a residential treatment center for kids who had been through severe trauma. They would often go into violent rages, and we were all trained on how to safely and gently restrain them until they were safe enough to not hurt themselves or anyone else. This information also has nothing to do with this post, except for the fact that I learned a valuable lesson in that training. There will be a point when we are on the other side of this. There will be a point when something scary ends, and you have reached the other side safely. The time will come when whatever weighed so heavily on you happened yesterday, and now it’s tomorrow, and you are on the other side looking back. Actually, the way we were taught it in restraint-training was “when the 150 pound ten year old is breaking windows and overturning tables, and then tries to beat you up, just remember that it will end at some point.” Nice, huh? But it stuck with me. And when I’m scared, or anxious, or it’s 8 am and I’m at Stanford hospital wondering “How in HELL is my 21 month old going to hold still for a 90 MINUTE Gastric Emptying Study while being restrained to a backboard and placed underneath an ultrasound machine?” I have to remind myself that this afternoon we will be running up the rubber mats at gymnastics, and Max will reach out to hold my hand and his little voice will yell “Go, go, go!” and he will laugh out loud as we run together all the way up to the top and then roll down again. This afternoon, we will be on the other side of this.

So he spent 90 minutes lying there, watching Curious George, alternating between calm repose and screaming hysterically “Ouuuuut!”. He was amazing, quite frankly. He was absolutely god-damn amazing. So adaptable. So sweet. So resigned. So great at calming down and getting in the “zone”. We needed this test. We need to know how food moves through his belly, and at what rate. It is one of the last remaining pieces to this puzzle. But when he had finally relaxed his body, and was watching The Man in the Yellow Hat chase George around for the umpteenth time, I walked quietly behind him where he couldn’t see me, and cried. Because his little head was just barely peeking out of the machine. And his sandy blond curls were fanned out on the pillow that was soaked with sweat and tears, and his bangs were brushed to the side where his Daddy had been stroking his forehead when he was singing “Itsy Bitsy Spider” to him.

I cried about how beautiful and resilient and charming and happy he is, even after going through all of this. He should’ve been at music class this morning, not eating a bowl of breakfast laced with radioactive isotopes so a cranky radiology technician could track it’s journey through his digestive system.

He had to lie there for 30 minutes, and then they kept him in the swaddle/seatbelt/really it was a straight-jacket but his hands were free for a 20 minute “rest” period, and then 30 minutes more. So when the tech came back in to say that she wanted him to stay there for 15 more minutes while she did her paperwork and reviewed whether or not they needed to take more pictures, it didn’t go over so well. I followed her back into her office. “Um, excuse me?” I said, with my I’m pretending to be nice but I am about two seconds away from becoming super-bitch if you fuck with my kid voice. “Yes?” she said. “He’s done.” I said. Sweetly.

I said “He’s DONE. We’re taking him out now.” NOT so sweetly.

“But we might not have gotten enough pictures…..” she said.

“He’s been in there for an hour and a half. Sorry. That’s it.” Except my “sorry” wasn’t really an apology at all, it was more like “Sorry that I am looking at you like you are a total moron for thinking that it is ok to ask a toddler to endure this for any longer. And I’m sorry that I am being ‘that mom’ right now, but I’m allowed to be. Because I am his advocate. My husband and I are the ONLY ones with his very best interest in mind. And Max can’t tell you to go fuck yourself, and your paperwork, because he’s not yet two years old. But I can. And I will. Because my job is to protect him and make sure that he only has to endure what is absolutely necessary to keep him healthy and safe. Sorry.”

And I wasn’t even finished with the last few words (and a GREAT steely-eyed glare) when I could hear Sean ripping the velcro off of the “seatbelt/really a straight-jacket” and wrapping Max in a huge hug.

Guess what? He does have Delayed Gastric Emptying. It’s official. Even with the medication that he’s on, his digestion is still delayed. What happens next? Well, that’s another post. But for now, we are breathing a little easier knowing that we finally have a framework for what is going on.

And this adorable little guy? 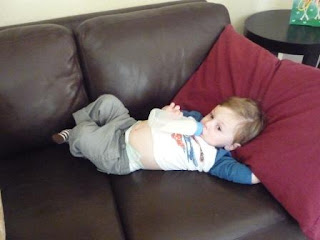 Let’s just say that the radiology tech called me at 8 am the next morning.

“Ummm….so this is C. from Radiology. Yeah, well, we were cleaning our machine last night and we found some of your sons TOYS stuck in there.”

After the first 45 minutes Sean and I just might have let Max entertain himself by stuffing things into the ultrasound machine by his head. Maybe. I mean, hypothetically, if we did, who would blame us right?

“Yeah, my boss wanted to know why they were there. And I told her that THE MOM was letting him PLAY with them during his procedure.”

Yes. I was. Thanks for calling!