There and Back…and Back Again 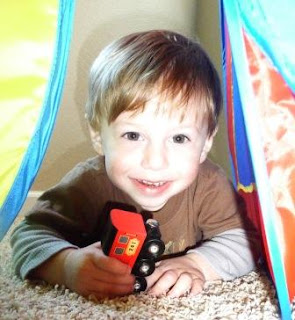 The rain is beating a staccato rhythm on our windows, and my two boys are chatting in the living room about “car, car” and “beep-beep”. All is right with the world, even though most days it isn’t. 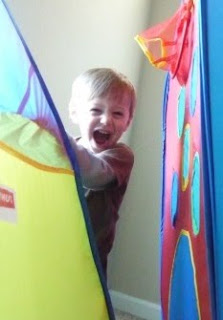 My happy little guy is sick again, vomiting three times in the last week. Once in the car seat, on the side of the road, while some bitch in an ugly sedan yelled at me to move out of her way. “It’s an EMERGENCY!” I yelled back, as I was frantically undressing my toddler in the back seat, peeling away his puke-stained clothes and wiping his little shivering body down with a baby wipe. “Brrr! Cold!” he said, with his eyes wide, perched on the edge of the backseat. My own eyes brimmed with tears as I snuggled him back into the spare sweatshirt that I found next to the snack cup and the ten stuffed animals on the floor.
Though our week has been marked with 1 am drives and 6 am wake-up calls, I am overcome with pride for our brave, silly, sweet little boy. He is a one-kid love parade. All week he’s been saying “Hug!” and then coming up and giving us a hug. He says “kiss” and grabs your face and plants one on you. The other night he rolled over next to me in bed, hugged my leg, opened his little eyes and said “Hi!” and went back to sleep! 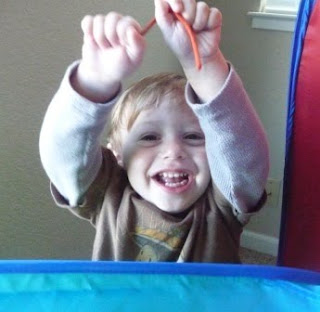 He was sliding a credit card (yes, he loves to play “pay”…I know, consumer lifestyle, blah blah)down his car ramp the other day and I heard him say “Set, Set, GO! Wee!” like we say when we’re sliding at the park. He says “tick tick clock” and counts with us when we go up the stairs. Favorite numbers that he chimes in on are always “two, eight, nine”. 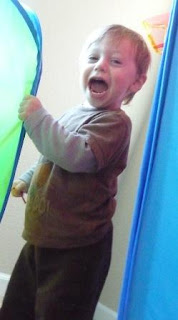 He still loves hiding in this darn tent, and yells “No! Hide!” when we tell him it’s time to go. In fact, he makes us chase him around the dining table when he doesn’t want to go somewhere. I’ve started leaving a coveted toy on the chair closest to the door when I want to lure him out, and sure enough, he comes tiptoeing out like a little mouse to snatch it and run back, but I catch him (of course) and delight in the fact that I am still smarter than he is (is that wrong?). 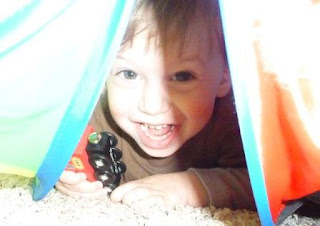 As hard as it’s been, as long as our nights can be, as terrified as we are that he is sick again and nothing seems to be working, we are still struck by how amazing it is to have this little person in our family. I love hearing his tiny voice shout “rain, rain!” as it hits our window. I love that he takes my hand and tells me to “walk, walk” so he can show me something. I love how he curls up next to me when I put him down in the guest room, and I fold my legs over his tiny legs to keep us warm. I love how his big eyes look at me (from about 2 centimeters away) when he wakes me up in the morning, and when I open my eyes he gives me a huge grin, and then snuggles back next to me. Even if it’s for only 3 seconds more, and then he’s off and running….it’s still the best thing in the world. 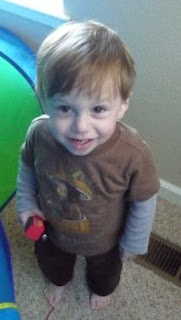 One Reply to “There and Back…and Back Again”