It’s hard to reconcile having a child who is so sick, when on his great days he looks like this…. 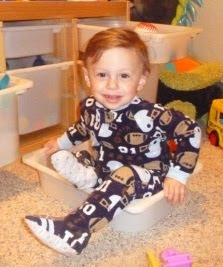 But things continue to go downhill in the land of the belly blues, and we are grasping at straws for answers. What we know at this point is that Max has something called Food Protein Induced Enteropathy, and maybe a little of what is called FPIES (Food Protein Induced Enterocolitis). What that means is that his belly is fighting off food proteins like they are the enemy. His belly can’t absorb them. And when the level of “toxins” gets too high, he vomits. And wakes up ten times a night screaming. 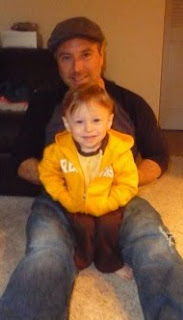 At this point, we’ve eliminated his known food allergens (dairy, egg, tomato, beef, tree nuts). We have also eliminated soy milk and soy products, because we saw that his symptoms got worse from soy. We have now eliminated all protein, as well as rice and rice products, because kids with these disorders seem to react the most to turkey, chicken, rice, all grains, green beans (legumes in general) and well, everything really. 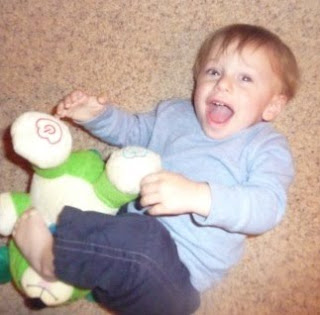 So what’s left for Max to eat. Ummm, nothing.
I have a huge amount of respect for our team at Stanford Children’s Hospital. We now have a small army of doctors working to put the pieces of Max’s puzzle together. The two GI doctors/allergist/nutritionist/and feeding therapist are all making themselves available 24/7 to help us figure this out. So when they told me yesterday that they feel strongly that he needs to be on his special Neocate formula ONLY for at least a week, of course my first thought was…
ARE YOU FUCKING KIDDING ME?
How in hell do you explain to a very verbal toddler that he can no longer eat solids?? How do you un-do sessions of feeding therapy/OT? It’s taken a YEAR to get this child to accept anything from a spoon! I seriously cried last week when he actually ate three bites of chicken, because I was so overjoyed. I bring snacks everywhere. I offer food constantly. I let him touch/taste/smell all sorts of foods because that’s what you do to help a child who won’t eat. And then we had to start removing foods that he was allergic to. And I panicked. But I figured it out. We could replace his beloved cheese with rice cheese. He could have turkey meatballs instead of beef ones. When a mom at playgroup started waving crackers around for her kid, I could bust out some dairy/egg/soy free ones. We were making it work.
And then Max got worse. I found some wonderful support on an online forum for parents who have kids with food allergies, and they started making some interesting points. “Your son is SICK. Who cares if he knows how to eat with a fork if his belly is so sick that he feels terrible all the time?” In other words, getting three bites of chicken in his mouth is not a “win” if he’s barfing five times in one day because he can’t handle it. His body is telling us he needs to try Neocate only.
So how do we do this? Well, we’ve done a modified version of it for the past few days. I’m telling myself that it’s to get him used to it, but really, it’s to get me used to it. He is getting all of his nutrition from the Neocate formula anyway. Of course, the goal is to bring him back to “baseline”. This means that he needs to have about a week of feeling better before we can introduce solids again. And when we do, it’s going to be one single-ingredient food at a time, for a 5-7 day trial each. Once we know that food is “safe” it’s considered a “pass”, and we move on to the next food. Anything that he starts reacting to is considered a “fail”, and we take it off the list for now. 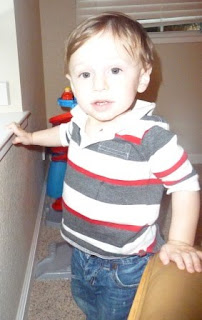 I would love to know what his baseline is. On Christmas Eve he threw up 5 times, and then slept through the night. We’re assuming that it was because his belly was empty, but it’s also possible that the poor little guy exhausted himself. Two days later he started having great naps because we were only doing formula in the morning, and skipping solids for breakfast. Then last night was terrible again.
The thing about FPIES is that reactions are often delayed. In other words, my food log says that he threw up after eating green beans, but it could actually be that the banana from breakfast was bothering him. And kids with FPIES can react to ANYthing. Like all grains. And fruit.
And since our old pediatrician clearly MISSED THIS when we would bring him in and say that he was vomiting/rashy/couldn’t sleep/and so on, we are now having to trial foods at 19 months old instead of at 6 months old. Which would have been SO much easier.
The other scary thing about this, is that kids with FPIES sometimes vomit to the point where they become lethargic and dehydrated. Not many of you know this, but there have been two times that I have had to call 911 after Max vomited because he suddenly became lethargic/sleepy/very sick. The first time we were at the park with some friends. Max threw up out of nowhere, was hysterical, and then pretty much collapsed against me. I sat with him for a while in the car, cleaned us up, tried to put him in his car seat so that we could drive to the doctor….no go. He wasn’t acting like himself, he was so out of it. I took him back to the blanket where our friends were sitting and he slid down my lap and lay on the blanket with a blank look on his face. This is a child who usually doesn’t stop moving. He never falls asleep on his own, much less in the middle of the park when it’s not even nap time. I felt like an insane mother, but I was terrified. When his eyes started to roll back in his head for a split second, I called 911.
Kids with severe GI issues often get to the point where they almost pass out from what is happening in their bodies. Thank god we have only seen this happen twice. Thank god Max usually bounces back from vomiting/feeling sick pretty quickly. But as things continue to get worse, we don’t know how his reactions will evolve. All we know is that they’re not stopping.
It feels like we have crossed the threshold between “Max has food allergies and it’s ok because we’re dealing with it and he’ll be fine” to “Now we have no idea the extent of what is happening in his body, but we know it’s more severe than just food allergies. It’s a major health issue, and it’s going to take some major strategy to treat this.”
And yet, our little dynamo still smiles like this…. 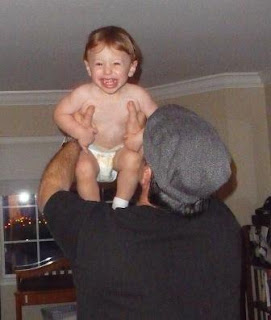