Jack’s folks invited us over for dinner last night, and we decided to let Max stay up past his bedtime so that we could all party a little….I mean, it was a Friday night and all.

When we got there, Jack gave Max a friendly hello…. 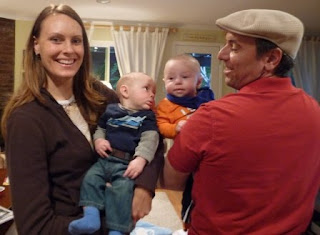 And then the boys had a staring contest….. 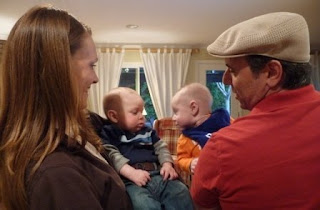 It was sometime after the “let’s play on the blanket together” and the “let’s go on a hunger strike and refuse to eat anything our mom’s feed us” moments that Max decided to show Jack how to have the world’s biggest melt-down. Screaming, crying, trying to throw himself off of my lap. No joke. Thank god we were at Sus and Matt’s house. Not just because there weren’t any other diners who could give us dirty looks, but because we had a great support system helping us out AND we got to borrow as many “calm-down” supplies as we needed! Jack was a very sweet boy and definitely has the skill of “sharing” down! We used his washcloth (dipped in cool water, to rub on Max’s gums in case he was trying to cut a tooth–didn’t work), his rocking chair (to try to give Max a bottle–didn’t work), his changing table (in case Max had a dirty diaper—didn’t work) and finally his baby tylenol (in case Max was upset because he was still feeling sick—oh yeah, that worked!). Max even got to borrow Jack’s ‘Thomas’ jammies, and then fell fast asleep snuggled up in Jack’s crib! It was all kind of reminiscent of how the Mommies used to share clothes, toiletries, and even sleeping space (only when we weren’t living together, and one of us would come to visit…..so wash that other picture right out of your heads!) Once Sus and I were both married, it was still nice to know that if we weren’t at our own house, we could borrow a pair of sweats after a fun night out (when we HAD to get out of our party clothes and chill on the couch), or grab a drink and a snack from the other’s fridge. Really, once you’re roomies, you’re ALWAYS roomies. It was nice to see that tradition continue, and little Jack didn’t even miss a beat….what a kind and generous little boy!
Once Max had passed out in the nursery, and Jack was happily playing on his playmat, we all had a chance to relax. Matt made an awesome dinner, and then Sus busted out with some old-school roomie desserts. There’s just something about Fall that brings back such good memories!
The Mommies toasted with some hot chocolate (made complete with handfuls of marshmallows), and the Daddies toasted with some spiked hot chocolate (made complete with Jameson). Finished it all off with some apples dipped in warm caramel and nuts….. 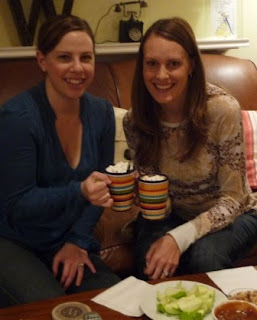 Such a sweet, sober picture. Not sure why we didn’t take a picture of the Daddies, who were feeling pretty toasty by the end of the night.
Jack the party animal was relaxing in a bath when we left, but my two boys were, well…..hammered. 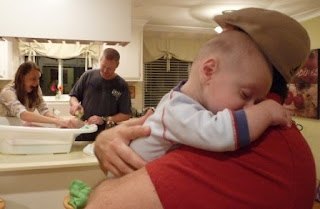