Just a few pictures from the last two weeks to show you how Max has grown….here he is after his first sponge bath last week. His umbilical cord fell off this morning, so from now on he gets real baths! 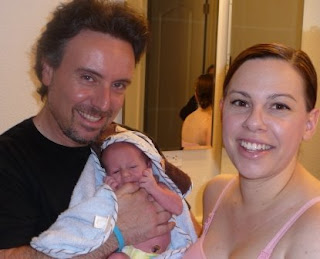 He looks so tiny in his car seat! 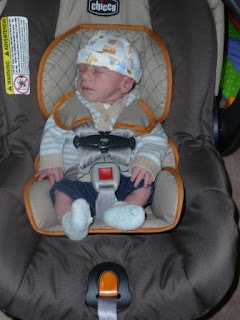 All snuggled in for a nap, in his favorite position (he sleeps exactly the same way that Mommy does!) 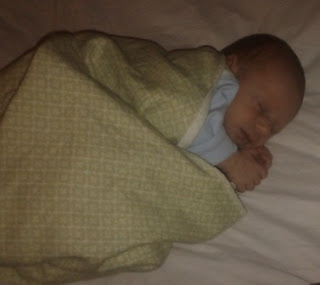 At two weeks old, here are some changes that we’ve noticed:
1. Max is much more alert now! He will hold eye contact with you for longer periods of time, and will let us play little games with him.
2. No more umbilical cord….he has a real belly button now! Was it pregnancy hormones when I got a little choked up that he had lost his last connection to being in my belly???
3. Max is finally starting to fit in his “newborn” size clothes! We had to buy him some preemie things when he was first born, but pretty soon his little legs were too long for those. Now his belly is filling out the newborn onesies (pictures to come, I promise!), even though his little bottom is not. Sean says that it’s because he has the “Simon butt”. Better that than my “Silverstein butt” I suppose 😉
4. Diapers, diapers, and more diapers. I got peed on for the first time this morning. Actually, it wasn’t just me…he managed to get his own belly, over his head, the fresh diaper that I was trying to put on, the changing pad cover, and the basket with diapers in it. Oh, and the adorable new jumper that I had just put him in. Fantastic fun folks. It’s amazing how a little guy can pee that much…and that far!