Disclaimer: If you haven’t figured it out by now, this is my pregnancy blog. Sometimes you may read it and think “Whoah…..TMI!”. Other times you may think “Yikes, does Kim really swear this much in real life?” Or perhaps, “THIS is the Kim I know!” Either way, just a heads-up that this may be a TMI post for some of you….

My 37 week appointment this morning was a bit of a wild ride. My payback for laughing at the “pee cups” for weeks on end, was that today when I peed in one, the protein count in my urine came back high. Well, slightly high. But then my blood pressure reading was also slightly high. What that means, is that I COULD have been at risk for toxemia or pre-eclampsia. Essentially, that means that my blood pressure could go so high that I would need to deliver the baby right away. This can definitely happen to women in their last month or so, and often without any warning. It’s pretty serious business.

So my doctor checked me out, and decided that it wouldn’t hurt for me to go over to the hospital for a few more tests. At the same time, he said that he was pretty sure that I did NOT have pre-eclampsia. And when Sean asked how sure he was, Dr. N said “I’ve been doing this for 25 years. I would be VERY surprised if you had it. But we just need to be safe.” I appreciated that. Then he checked my cervix, and found that it was closed up tight. In fact, the official term was that it was an “unfavorable cervix”. Apparently this means that it is “unfavorable” to delivery, because it’s not open. Sounds negative, but to me…..this was GREAT news! Combined with the fact that Max is still resting nice and high up, the doctor thinks that he will not make an arrival any time incredibly soon. I understand that the train of thought is that if I did have pre-eclampsia and needed to deliver Max right away, I would have to have a C-Section because my cervix wasn’t ready. And that is what makes it so “unfavorable”. BUT, considering that I’m living in a hotel, with a very sick dog and a sick husband….having a closed cervix at this point sounds pretty damn FAVORABLE to me. As long as I don’t have pre-eclampsia and need to deliver Max STAT (isn’t that what they say on Grey’s Anatomy?)…..brief moment of panic……OH MY GOD I DO NOT WANT TO HAVE A C-SECTION THIS AFTERNOON….. But I’m getting ahead of the story here….so the doctor had me lie on my left side before I left, and took my blood pressure again. This time it was normal. Which made me feel better about going to the hospital for tests, just to be sure.

So Sean and I walked over to the ER, which conveniently is right next door. They checked me in and took us up to Labor & Delivery. The nurse that helped us was SO incredibly sweet. She explained that first I would need to give another urine sample. And because this was the hospital, there was no F-in’ around about the cups over there. Not only do they do a “clean catch”, but they make you go through THREE alcohol wipes to ummm….prepare. Because one (or even two???) isn’t enough??? Then she had me lie down and hooked me up to the monitor for a Non-Stress Test. Fortunately, we had just had our hospital tour and knew exactly what to expect. They put one sensor on my belly to measure Max’s heartbeat, and one to measure any contractions that I was having. Immediately, the sound of Max’s heartbeat filled our room….there he was, loud and clear! I had to have Sean take a picture to document the drama. Obviously I wasn’t as terrified as I could have been, or I would have never allowed such things! 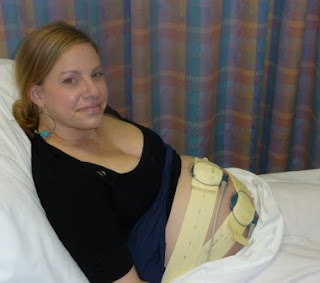 They also ordered some lab work, which I was obviously thrilled about. The odd part was, that the lab tech seemed to have never been in the L&D ward before. She started asking questions about the machines like “Is that the baby’s heartbeat? Wow!” Uh-oh…this could be bad. So I had to give her my speech about how I’m tough to draw blood from, you might want to use a vein in my hand because the ones in my arm collapse easily, please use a butterfly needle, I could pass out….blah blah blah. And you know what she said? “Sure thing!” Seriously? No fight? No ego? She wrapped the rubber thing around my forearm, found a vein in my hand, said “This is going to hurt a bit”, stuck the needle straight in (and it hurt like a motherf-er)…..and what felt like ten seconds later she was…..DONE! “You’re done?!” I said? “Yep!” she cheerily replied. I was so impressed that I actually watched her label TWO whole vials of blood because I was shocked that she had gotten that much so quickly! When I told her that she replied “Well, I knew I didn’t have much time before your vein collapsed, and that would have just embarassed me and made me more nervous. When a patient tells me to use their hand, they know best. Why would I doubt you?” I asked her if she could please be on-call when I went in to labor. I wanted to hug her.

Once my Rock Star lab tech left, I stayed on the monitor for a bit longer. I had a hell of a Braxton-Hicks contraction, which we could see on the monitor, and Sean could see on my stomach too. Apparently, this made Max a little irritated with the whole situation, and his heart rate fluctuated just a tiny bit. Our nurse said it was nothing to be concerned about and that “If you had something squeezing your head for a bit, you wouldn’t be so happy either”. However, when this happens during a Non-Stress Test, they want you to stay for a full hour just to be sure that everything evens out. They had me roll onto my left side, and the nurse took my blood pressure. I did briefly wonder if the automated machine squeezing the hell out of my upper arm would make blood gush out of the recently poked hole in my hand, but it didn’t. My blood pressure reading turned out fine. I did take advantage of this “hospital trial run” though, and happily accepted some juice from the nurse. Mmmmm….apple juice with ice chips in a cup with a bendy straw. Delightful.

Soon enough, the lab results came back and looked pretty much ok. My urine counts were a bit wacky, and the doctor is going to be calling about the possibility that I could have a UTI. Wow…how did I miss THAT? The doctor called L&D to check on me, and then said I could take my unfavorable cervix and go home. Oh, and I should look out for headaches, stomachaches, contractions, and swelling. Shit. I have all of those things on a regular basis. In fact, I have a raging headache right this minute. But I guess I’m fine. According to my pee, blood, and the little lines on the monitor display (Max was an active little guy during all of this!). Chalking all of this up to a really interesting trial run. And thanking god that everything is ok.