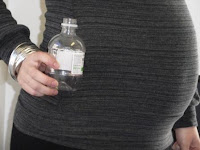 What do you call 50 grams of pure glucose in a tiny bottle when a pregnant woman has to drink it? Glu-Cola. I kid you not. Some sicko must have decided that because it tastes somewhat like old, flat soda….that they’d call it Glu-Cola and fewer pregnant women would barf it up because it sounded like something you could order at a diner? Not so much.
Today was the big Glucose Screening Test….or The Glucose Challenge, as some doctors call it. Again, enough with the “making it sound better than it is”. This is not Road Rules. The only “challenge” here is that you have to fast for 12 hours, drink a bottle of Glu-Crap in less than 5 minutes, sit in the uncomfortable chairs in the lab waiting room for an hour (with all of the teenagers getting their drug tests), and then have a lab tech quickly search for your vein after exactly 60 minutes. The point of all of this fun is to see how your body responds to sugar, so that they can screen you for Gestational Diabetes. If you fail the test, you then have to go back and have another test, where you have to drink three times as much Glu-Crap and have your blood tested 4-6 times over four hours. Pure Sadism.
Scottie was my moral support today, and was going to drive me to the test and wait with me. My doctor had given me my very own bottle of flourescent orange Glu-Crap at my last appointment. He said “Drink it at home. Drive directly to the lab. Tell them you’re there for your Glucose Test. This way, you won’t have to wait for an hour there”. Fantastic! Except every new or pregnant mom that I talked to said “Hmmm….I had to drink it at the lab”.
So I called the lab before I drank the magic potion. I was feeling a little like Alice in Wonderland. Here’s what they told me: “Your doctor said what??!! No, you can’t drink it at home. You have to drink it here. It’s illegal for him to give it to you!” Illegal? My “don’t dye your hair, don’t even breathe the smell of soft cheeses, don’t gain a single pound beyond the recommended guideline” conservative misogynist OB almost had me do something illegal???? This will be GREAT fun to tell him tomorrow! Apparently, they do things a little differently in P-Town. In the City, they make you come in to drink the whole damn thing so that they can WATCH YOU, and even better, because they said “We don’t want you out and about with this much sugar in your system…it’s DANGEROUS.” No crap, lady! But I bet the street value of the orange-flavored Glu-Crap that’s still in my fridge could buy me a new pair of shoes! 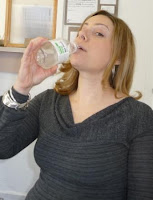 So here I am drinking the Glu-Crap IN the lab. The flavor of the day was lemon-lime, chilled, and clear…..which made it a little easier to drink. But not much. Because I had to down the whole thing in 5 minutes, and the lady was adamant that I get every last drop. Delish. Immediately I could feel Max doing cartwheels in my belly….baby sugar rush!! “Hey Mom, what the F?! You pig out on a combination plate Mexican platter last night, then no food for 12 hours, and now you’re drinking 10 Slurpees worth of sugar??! This is psychedelic man!!!”

Here Scottie and I are taking self portraits in the waiting room. Why? Because we had sixty whole minutes to sit there and wait for the glucose to intoxicate me, and watching the Pac Heights teens whose dads had ordered them to undergo drug testing was getting old. Finally, it was my turn to have my blood drawn. I have never in my life been so excited to have a needle stuck in my arm. But first I had to give them my disclaimer.
“I have to lie down, because I might pass out.” Oh wait, can I lie down flat since I’m 27 weeks pregnant and I’m not supposed to lie on my back? Damn! Oh well.
“You need to use a butterfly needle because my veins are small and they usually collapse and people have a hard time drawing my blood. You may need to draw from the top of my hand”. To which the lady, like EVERY SINGLE LAB TECH EVER puffs out her chest and says “Nah. I’ll be fine. I’m good at this.” Uh-huh. Trust me lady.
I get on the table, and she ties off the tourniquet. She hits my arm a few times. Rubs it. Hits it again. Looks harder. Guess what? No veins she can use!!! Sheepishly, she says….“Let’s try the top of your hand”. You think?! And then, not sure why, she says “This is gonna hurt, so take a deep breath”. What??!
Two vials later, and Scottie and I are saying Peace Out. We high-tailed it to the nearest restaurant, because I was starving…..and I tried not to pass out while we waited for our food. Then it was off to work, where I realized that the sugar high was preventing me from stringing sentences together. By 4 pm I was crashing from the sugar rush, and ready to do a nose-dive into my desk. I guess that’s what happens when you drink 10 Slurpees worth of sugar in 5 minutes. We’ll know in a few days what the results were. If I could take back the enchilada/taco/rice/beans/guacomole/horchata that I had the night before and start over by fasting for the entire weekend, I would. Apparently many women fail the first test and have to do the sadistic second test, but from there, only 2-3% are actually found to have Gestational Diabetes. And it doesn’t run in my family. I am praying to every god that exists that I do not fail this test. There will be no more Glu-Crap in my future. Plus, I only have two hands. Where on earth will they draw blood from 4-6 times???!